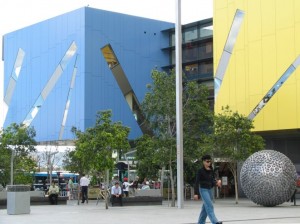 Oooh, pretty. According to one of the staff at the library (I took a tour), this is one of the top 5 buildings in Brisbane that people ‘love to hate’. It reminds me of the Ernst & Young building in Melbourne, a giant mass of glass and steel that is on top of something else (in the case of the E&Y building in Melbourne, it’s propped up above the old Herald-Sun offices by yellow poles; in the case of the Brisband Council City Library, it’s propped up above some Lego blocks by grey poles and then propped up AGAIN above the grey box by some yellow poles).
The library inside is fascinating. It is over 3 public levels (as well as a basement level featuring a $2mil book sorting machine which is reminiscent of a mail sorting machine). They force all new members to go to an obscure corner of the top level to join, thus ensuring that they give themselves a tour on the way up. They also have all kinds of funky interior features such as glass meeting rooms which made me feel like I was having a meeting in a fish bowl (designed to prevent people shooting up/having sex in obscure meeting room corners) and neon lit shelf ends (“the non fiction section is in the hot pink area next to the go-go dancers”).
Interestingly enough, although they have a heap of self-check machines and a giant book sorting/automated returns machine, they don’t currently use RFID. Reasoning for this may have something to do with the cost (if you have 32 libraries I am guessing that tagging all of your items would not be cheap).
An interesting thing to note was that they receive all of their items totally shelf ready. Some items (ie some LOTE items) were sent from the supplier to an external cataloguing/processing agent and then to the libraries. I wonder if Brimbank could possibly do something similar, especially as we order some of our stuff direct from the country of origin (ie our Maltese DVDs come to us direct from Malta). That being said, Brisbane’s LOTE collection was tiny compared to ours.
Brisbane City Library – Built from Lego Blocks and steel